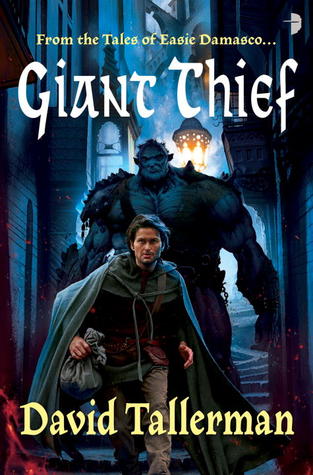 Giant Thief started out well. The beginning was fast-paced, set up an interesting fantasy world and protagonist, and running off with a giant seemed interesting enough… until it wasn’t.

It just didn’t do it for me, and I think it’s because the book ended up being one big long chase sequence. There was not enough room for the characters to breath or for the major plot to even be exposed properly (a power-hungry warlord who was conquering cities and towns that refused to unite properly against him due to stupid politics).

I liked how the story started. I liked the giant. I sort of liked the thief. I found the world-building and the descriptions of the landscapes to be well done, if overdone for me. But then, I know people who really enjoy poetic descriptions of the countryside and I have no doubt that David Tallerman can write – he definitely proves that. I just think plot and character development should have a higher priority over ‘storytelling’, you know? The ability to spin a yarn is great, and the author’s grasp of the English language is far better than mine. It’s just that to me, storytelling is a podium to put a STORY on, and Giant Thief was less of a story and more of a keeping-the-protagonist-and-the-reader-in-the-dark-for-too-long. There was a bigger story there, and we get a summary of it by the end, but honestly I found the main character the least interesting character to follow around in this particular tale. Estrada would have been far, far more interesting. Hell, the giant would’ve been a more interesting protagonist, as we find out later in the book he’s much more than he seems.

So even though I didn’t particularly like it, I expect others might and I didn’t find it a chore to finish. Can’t recommend it, but I don’t feel like it was a waste of my time since I like trying different things.

Even the wicked can’t rest when a vicious warlord and the force of enslaved giants he commands invade their homeland. Damasco might get away in one piece, but he’s going to need help.