1. Why is the Frankenstein’s monster concept so enduring in modern life?

Even if you’ve never read the book, you know the story. At it’s simplest, it is a horror story about a man-turned-monster and a doctor daring to challenge nature. These are now staples of the horror genre. How many mad scientists and awry experiments have been written since? Or what about creatures back from the dead?

I think the reason Dr Frankenstein and his monster have survived for almost 200 years (yes, it will be that long in 2018) is because the story has inspired so much. A large part of it has to do with film – Frankenstein was first turned into a movie in 1910, and since then 55 movies have been featuring Frankenstein’s monster (although there are some tenuous films in that list, but we can safely call it 50, and that’s not counting all the movies and television the monster has cameoed in). It’s become a part of popular culture, and the things Frankenstein has inspired… can you imagine a world without Igor?

I have this, and I am using it as my diary.

So why is Frankenstein so adaptable?I think it’s because it’s got two great ideas going for it – monster and creator. As a comparison, Prof Van Helsing did not permeate pop culture nearly as much as the romanticised aristocratic vampire, Dracula. He didn’t create the monster – he just killed it (after lots of research and experimentation). Sure, we’ve seen plenty of vampire-hunters since, but how many of them seem to be inspired by the Professor? Dr Frankenstein is much a more creative, flawed and interesting character. We’ve therefore seen the ‘mad scientist playing God’ and ‘well-intentioned scientist in over their head’ as the catalyst for many, many monsters and experiments. 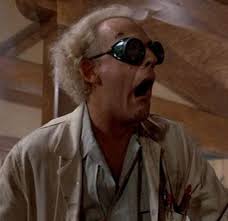 But I’ve gone off on a tangent here: the original question was about Frankenstein’s monster. I think it’s survived because it’s got three main things going for it:

1. The monster is undead.

2. The monster is an experiment; a creation.

3. The monster has a conscience.

Wow, that was an awful lot of waffling to arrive at the final point. I hope I’m better at this when I start writing assignments on teaching.

What do you think about the tale of Frankenstein? Why do you reckon it survived for so long?