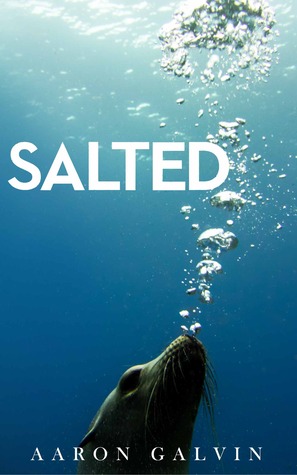 This book had a really interesting idea to it: selkie urban fantasy! The ‘salted’ humans could be traditional leopard seal-selkies, massive elephant seals, dolphins, and even sharks! Each animal determined the person’s social status in the ‘salt’ (ocean). Honestly, the whole concept had me intrigued right from the start, throw in a coming-of-age/self-discovery subplot about a teenager who discovers his own heritage, and I should have been sorted.

Despite the novel concept, the execution didn’t hold my interest all the way through. It’s hard for me to pin it down to something specific – I think the main plot of tracking down runaway slaves was dragged out too much. I did get a little lost with the large number of characters, and for some reason I just couldn’t care for any of the characters apart from Garret. Lenny was a strangely dislikeable character, and I couldn’t sympathise with Chidi’s story. It sounds cold, but my feelings did not change throughout the book, and it’s hard to get invested in a story when you don’t care what happens to the characters.

Still, I am curious as to how the series plays out. This was the first book so maybe if I read the second the characters might be fleshed out in a way and I could connect to them.

Recommended for those wanting a twist on the selkies legend in a modern setting.

Life isn’t better under the sea. Lenny Dolan is all too familiar with this reality. A Selkie slave in the realm beneath the waves, he has no choice when charged with leading a crew ashore to capture an elusive runaway. If unsuccessful, the loved ones kept behind will pay for his failure with their lives. But when their target leads Lenny and his crew to deeper, darker secrets, the Selkies are faced with a moral dilemma. Secure their own freedom at the expense of others, or return empty-handed to face the grisly consequences? How Lenny and his crew answer the question will teach them the harshest truth of all. Only through the loss of innocence does one become Salted.